Nebraska is America's only triple landlocked state. That means no matter what direction you drive, you will need to go through at least three other states to get to the ocean. It's a centerpiece of midwestern culture, known for agriculture, including corn and beef production. The state also has a surprising number of rivers and even National Forests for visitors to see. Plus, the growing cities of Omaha and Lincoln have made the state an increasingly popular destination.

Here's a look at everything the Cornhusker State has to offer.

See a map of all camping in Nebraska.

The Nebraska State Parks system has only eight official parks. Still, several State Historical Areas and State Recreation Area have a wide range of spots to check out for camping in Nebraska.

One of the most unique is Indian Cave State Park, named for a massive sandstone cave located inside the park. Visitors can also check out the Missouri River and hiking trails inside the park.

While Nebraska is known for the great plains, another park, Smith Falls State Park, boasts the state's highest waterfall at 70 feet high.

National points of interest include scenic rivers and historic sites in the state.

The Missouri National Recreation River stretches 100 miles and cuts through South Dakota, Nebraska, and Missouri. Visitors can enjoy fishing, boating, and nearby trails.

A lesser-known river but a destination that still has a lot to offer is the Niobrara National Scenic River. This area is contained entirely within Nebraska and is a popular summer destination for tubing and rafting down the river. There are also several waterfalls to check out.

Nebraska is also one of the 16 states on the Lewis & Clark National Historic Trail - West. This historic site stretches from Pittsburgh, PA, to the Oregon Coast and marks the route taken during the historic expedition more than 200 years ago.

Many RV parks in Nebraska are close to some popular destinations.

The drive from Omaha to Lincoln is about an hour, and there are RV parks located near both of them. Including Ashland RV Campground near Omaha and Camp-A-Way in Lincoln.

For anyone driving through the state and taking I-80, Prairie Oasis Campground and Cabins and Grand Island KOA are both a short drive from the interstate. I-80 Lakeside Campground is another possibility further west in North Platte, plus it features waterside camping.

There are options for free camping in Nebraska near major highways and scenic nature spots, including Streeter Park Campground, where water and electric is available. The campground is in Aurora, which is not far from Grand Island, which has some of the best nature spots in the state. Another similar spot with some amenities that's also free is Buckley City Park.

Anyone making their way through the state and looking to stay right off of I-80 can overnight at places like The Archway which is centrally located in the state.

Anyone looking to enjoy camping in Nebraska while exploring the great outdoors needs to make a stop at the state's National Forests.

Nebraska National Forest is shared between Nebraska and South Dakota and is a short distance from Badlands National Park. Within the forest is Oglala National Grassland where visitors can enjoy massive open spaces.

A short distance from there is Samuel R. McKelvie National Forest, which provides more grasslands and hiking and fishing.

Robidoux is located at the foot of Scotts Bluff National Monument. The sites are spacious and level. There are lots of trees but not where they are a nuisance to RVs. The laundry and bath house are clean and well kept. We always stay here when in the area.

Smack dab in the middle of Lincoln and Omaha and just minutes away from the best steak of your life at Round the Bend Steakhouse in Ashland. Love that this place had beer on tap and a pool to cool off in. Spots are spacious and everyone was very nice. Would definitely stay here again.

" Nice place to stay during the week."

I enjoy camping and fishing at this location. Facilities available, including coin operated showers. Very crowded on the weekends, so a reservation is recommended.

"Our Favorite So Far!"

I don’t think there are anymore actually campsites or fire pits. There’s a turn around/parking I’m assuming for boat trailers. We backed in there and saw no one for the night. Added bonus! The lake there was frozen. Kids had a blast sliding around on it! 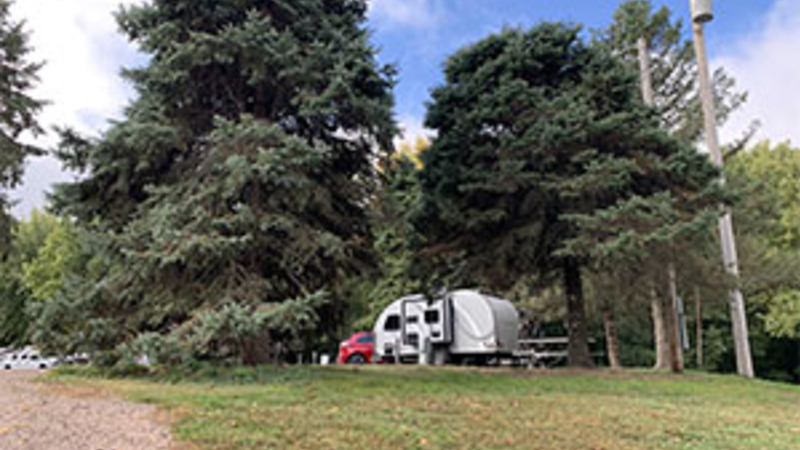 6 Best Places to Camp in Nebraska

These Nebraska campgrounds received the most 5-star reviews in 2020.