With its 840 miles of coastline, beautiful mountains, and fun cities, California is at the top of many people’s adventure lists. From the Sierra Nevada Mountains to Joshua Tree National Park, California is filled with beautiful destinations, sunny days, and plenty of those Beach Boys vibes.

California has an ample amount of dispersed camping if you know where to look. Here is where you’ll find the best no-cost camping in the Golden State.

Where to Find Free Camping in California

As a general rule of thumb, finding free camping on the coast—or any coast, really—is difficult. There are exceptions to this rule, but if you’re watching your budget, the coast is a tricky place to do it.

Luckily, the interior of California is full of public lands, including the Bureau of Land Management, National Forest, and National Park Service lands, where you can settle in for a week of adventure and relaxation in a beautiful place.

Free camping on the coast most often takes the form of a night spent in a casino parking lot. This option is usually only open to self-contained campers like RVs or campervans. Campendium community favorites, listed from north to south along the coast, include Lucky 7 Casino in Smith River, Bear River Casino in Fortuna, and Garcia River Casino in Point Arena.

Other coastal spots include Nacimiento Road in Big Sur and TV Tower Road just outside of San Luis Obispo.

In the northern reaches of California, you’ll find clear lakes, pine-filled forests, and plenty of spots to pull out your mountain bike during the day and chill around the fire ring at night. One boondocking hot spot is the national forest lands around Lassen Volcanic National Park. Rocky Point East in Susanville is a favorite, featuring a sizable lake with a boat ramp for kayaks or paddleboards.

A bit further north, in Modoc National Forest, you might find total solitude at Curren #2, near Lava Beds National Monument.

US 395 through the Inyo National Forest, which stretches along the eastern border of Yosemite, Kings Canyon, and Sequoia National Parks, is the crown jewel of California free camping.

Alabama Hills Recreation Area is the hands-down favorite of the Campendium community (those views of the Sierras are hard to beat!). Those seeking a quieter experience will find it at lesser-known gems like Owens Gorge Road and Sagehen Meadows.

In Anza Borrego, which is less than two hours from San Diego, Blair Valley takes the cake with panoramic views, quiet sites, and spots to hike. At Joshua Tree, which is a popular getaway from Los Angeles, you’ll find reliable cell service and plenty of sun for your solar panels at Joshua Tree North and Joshua Tree South, both a stone’s throw from park entrances.

Last but not least is the beautiful solitude of the Mojave Desert, which is best enjoyed in the winter or early spring. The Kelbaker Boulders is an excellent spot for a single camper or head to Kelso Dunes Mine for more spacious camping spots and dune access.

"Not for 5th wheels or Motorhomes of decent size"

Beautiful and dynamic. Just by driving around, you can tell the BLM is trying to keep the larger rigs out due the hundreds of closed sites around. The site size and accessibilty extremely limits larger trailers and RV's. I have a 1-ton pickup and a 30-foot 5th wheel and only found a handful of spots that were suitable, but were taken. They...
Read More

"Great spot just for an overnight."

Easy access on and off the highway friendly staff direct me next-door to purchase propane and give them your good Sam club membership for a discount. 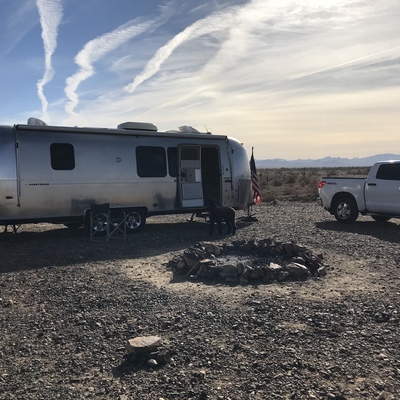 "Conveniently Located Off Of I-5. "

Great quiet spot right off the freeway. However, the paved lot is under construction for a new hotel, coming 2024. Turn into the gravel lot to park RV. Cheeseburger and fries $5. Daily until 4pm.

"Safe and Quiet - Great Hiking too!"

We arrived at Whitewater Canyon Preserve about an hour and a half before they close the gate for the evening. The staff person at the desk couldn’t have been nicer - explaining about the preserve and where we would camp. We had called in advance but found out there phones have been down. Thankfully there was room for us! Parking on asphalt,...
Read More

Out & About
11 reviews
Joshua Tree, CA

"Felt Safe And Was Quiet"

I was not intending to stop at Joshua tree but happened to arrive in town after dark. I found this location through this app and hoped for the best. The gps took me straight to it. It’s a bumpy dirt road but not too bad. I found a open grass area and parked, nervous because I couldn’t see my surroundings. The stars were magnificent and it was...
Read More 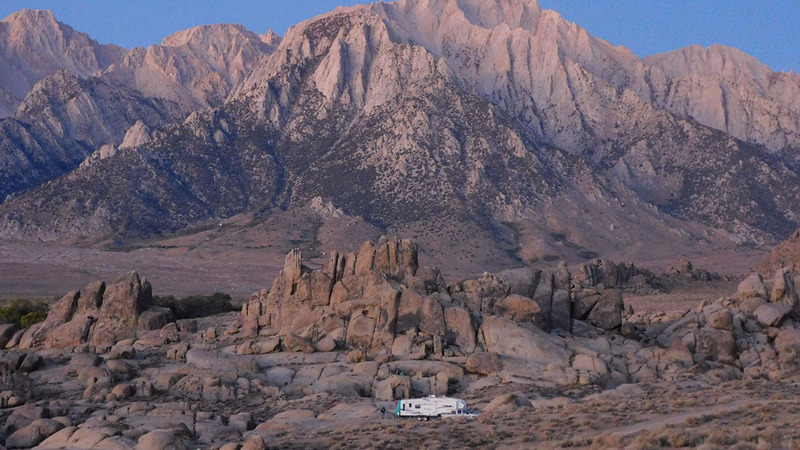 28 Best Places to Camp in California