When it comes to the Great Lakes, they've got Michigan surrounded. Add to that a multitude of much smaller bodies of water spread across the state, and it's easy to see why waterborne recreation is so popular here. Add to that, ample camping opportunities, hardwood forests galore, and the perfect blend of touristy villages, happening college towns, and cities undergoing a modern-day revival, and you can easily see why Michigan is one of the best states for camping.

More than fifty state parks in Michigan offer camping to both RV and tent campers alike. In the state's Upper Peninsula, Muskallonge Lake State Park is sandwiched between Lake Superior's freshwater coastline and the smaller body of water for which it gets its name. Surrounded by state forest and small-town charm alike, it's the perfect place to get your feet wet in Michigan's wilder northern stretches. It's one of a handful of parks in the "U.P." where the diversity of the state's park system really shines.

For those interested in rest and relaxation, soak up the views at Straits State Park in St. Ignace, the perfect basecamp for exploring the fudge and pasty shops for which the region is famous, and dive deeper into the history of the area with a trip to Mackinac Island. Looking for something a bit more rugged? Porcupine Mountains Wilderness State Park is loaded with that deep-in-the-woods camping experience that's becoming harder and harder to find east of the Mississippi. In search of waterfalls? Lower Falls Modern Campground in Tahquamenon Falls State Park is a perfect example of the type of family camping the state provides in abundance.

Crossing the Mackinac Bridge into the "Mitten," Michigan's lower peninsula, the opportunities for accommodation in the parks system only amplify. The state's residents love camping, which means it's often a good idea to make a reservation ahead of time, but there is also a multitude of parks to choose from. On Lake Michigan, campers get another opportunity to stay near the big waters of the Great Lakes with an option to explore smaller, less choppy aquatic options as well via Ludington State Park, near Hamlin Lake. From there, following the popular state route M-22 into the Leelanau Peninsula, Leelanau State Park is a great place to call home while experiencing both the shoreline the park is centered around as well as the many small towns that make it such a delightful area to explore.

This is only the tip of the iceberg. Michigan State Parks offer some of the best camping destinations available. Most provide better than basic amenities, including fire rings and picnic tables at your site, water and electric hookups, hot showers and more. Trails weave through the forests and along the beaches, and many camping trips revolve around visiting these parks alone. Note that you will need to purchase a state park pass, which is not included in the price of your campsite, but it also gives you access to even more free camping via Michigan's state forest campgrounds.

If you're already exploring campgrounds like Holland State Park or Hoffmaster State Park, you're perfectly positioned to explore one of Michigan's most impressive sites – Sleeping Bear Dunes National Lakeshore!

Massive, sweeping sand dunes play a constant game of tag with Lake Michigan herself, with camping available immediately with the park via D.H. Day and Platte River Campgrounds. The latter even provides electric hookups, a rarity in national parks in general.

Heading north again, beyond Mackinaw City and into the Upper Peninsula once more, Pictured Rocks National Lakeshore boasts some of Mother Nature's handiwork in the form of dramatically colored cliffs, constantly battered by the nearly ocean-sized waves of Lake Superior as it carves caves and arches into the earth.

While the amenities aren't always as prolific as what you'll find in the state parks, at $20 or so per night, staying at national park campgrounds is a better value than you'll find on Michigan's other public lands. Given that these types of parks celebrate the most beautiful natural features in the United States, you won't typically regret the view, either. Plus, if you prefer quiet and solitude, national parks are a better bet – while almost all camping you'll find in Michigan is "family-friendly," that doesn't always mean low-key fun when the weekend comes around.

Michigan is also home to Isle Royal National Park. Though there is no way to drive there and no RV camping, the island is home to tent sites and cabins alike, making for a truly unique camping trip.

Various public lands in the Mitten and the Upper Peninsula allow for free camping. You'll find spots not only in both the Ottawa National Forest and Hiawatha National Forest, but also via parks on private utility company-owned land as well as the Michigan Department of Natural Resources.

Free overnight camping can also be had via Michigan's freeway rest stops and some welcome centers, as well as in the parking lots of businesses like Walmart and Cabela's. These stops may not be the most glamorous, but they can't be beat for convenience. Various gambling establishments across the state, like Turtle Creek Casino or Soaring Eagle Resort, allow overnight camping for their guests as well. When it comes to casino camping, or utilizing the free services of any private business, it is always a good idea to check with management about any rules on where you can specifically park for the night.

Michiganders tend to make three major vehicle purchases: a boat, an RV and something to drive to work, in that order. With so much outdoor recreation available, it's no wonder that finding an RV park with all of the luxuries that full hookups, pools, playgrounds and more provide is as easy as pointing a finger at the state map.

From the KOA outside of Detroit all the way to Copper Harbor, private RV parks are everywhere. Wild Cherry Resort is one of Michigan's best campsites in general, but you'll find both affordable and luxury options everywhere from the shores of Lake Huron to the Wisconsin border.

Beyond being home to most of the free camping in the state, even the paid campgrounds in Michigan's national forests are some of the best value you'll find anywhere.

For the most part, expect simple, primitive camping in a forested location, hiking trails and wildlife watching nearby. A few campgrounds–like Camp 7 Lake and Colwell Lake Campground in Hiawatha National Forest–even have electrical hookups. Many campgrounds are near a shoreline or have a nature trail nearby, and most come with at least vault toilets and trash service. While you won't have hookups, the state is full of dump stations where you can relieve your tanks while moving from one campground to the next.

All in all, Michigan is a haven for campers, with plenty of options for every variety of tent, RV or other means of getting some shut-eye beneath the stars.

We had an excellent stay at Gerometta’s Resort. Sally and her daughter Jen were wonderful hosts and made us feel like old friends. We rented a boat and some fishing gear from then for a reasonable price. It made for a relaxing day on the water. From camp, Kitch-iti-kipi is a short bike ride away. Ride your bike to waive the park entrance fee....
Read More

"We were hopeful to get a first come first serve spot."

We pulled in in Wednesday after noon around 3:30 PM. Drove through and saw 3 sites up front that were open (1, 2 and 5) Decided to continue around loop 1 then loop 2. Many sites were tagged, but most campers must have been kayaking or in ST Ignace for the car show? In our drive around, we saw 1 or 2 sites that would be tough with a travel...
Read More

I’m a solo camper who lives full time in my trailer. Campground is nice. There are lots of lovely shaded and waterfront sites plus free Wi-Fi. Only downside is that all amenities including the water park and bounce house were closed. The showers were absolutely disgusting so I just didn’t shower while I was here. The camp store also wasn’t open...
Read More

Families love this place. Amenities include a pool, jumping pillow and weekend activities like bounce houses, foam party and food trucks. We have lots of family in the area and it was a great spot. Sites D01 and D02 have concrete pads and lovely decks. They just laid new rock on the west side spots and the inside set on the north. Sites vary on...
Read More

"Great views. Clean Facilities. Only 30A or Rustic "

Stayed Fri-Sun in mid-June. All sites were full w/o feeling cramped. Easy, adjacent beach access via stairs or road down the bluff. If you crave full-hookups this is not your jam - dry camping only. That said, access to potable water was w/in 100’, likely throughout. 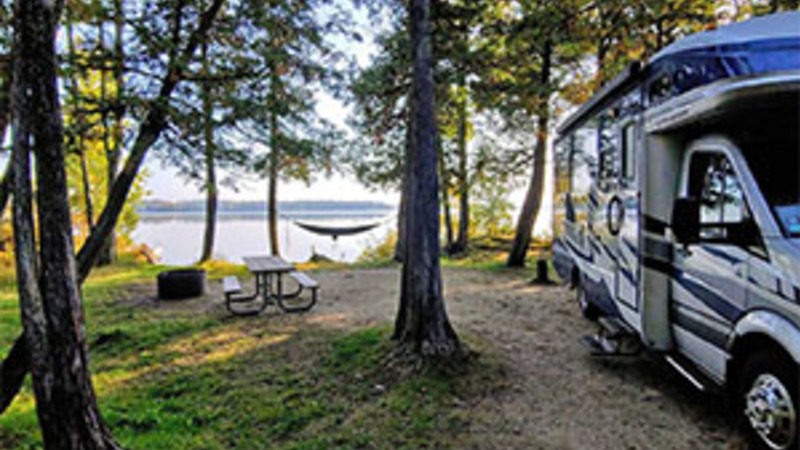 The Best Camping in Northern Michigan

There are many beautiful places to camp in the Great Lakes Region, but in the fall, northern Michigan is one of our favorites.